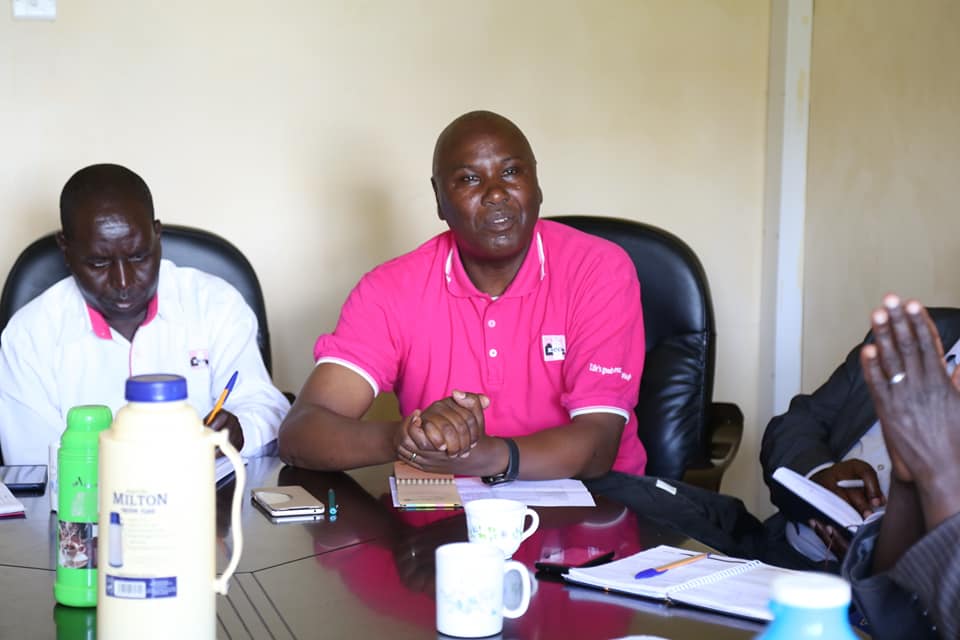 County Government of Nandi through the Department of Agriculture and Cooperative Development in collaboration with Nandi County Dairy Farmers Cooperative Union (NDFCU), is working towards concession with local milk processors to bargain for better milk prices on behalf of farmers.

According to experts in dairy sector, the market price of milk is always the engine/determinant of production. A good pay equals more production, and without good prices, then expect less production. Locally, the cost of milk production has in recent times tremendously increased to a point that the profit margin of a bottled water is almost higher compared to that of bottled milk.

While co-chairing the negotiations meeting with representatives from Kenya Cooperative Creameries (KCC) and Kabianga Dairy Premier Limited, Chief Officer in charge of Cooperative Development Dr. Benedette Tiony said that it is always very important that farmers invest and reinvest in a business that makes sensible returns.

In addition, Dr Tiony said that the department has put in place measures to help farmers increase production and has already rolled out a subsidized Artificial Insemination (AI) program and other extension services. “We are also putting resources to strengthen cooperatives through which more farmers will benefit”, she added.

After their first meeting, both the board and the processors agreed that the farmer is taking home very little after toiling and there was need to sit down, bring on board other stakeholders and review the prices.
On his part, the Chief Officer for Agriculture Mr. Wilson Lelei said that the plan to have a farmer-owned milk processing plant in Nandi that will ensure a stable year-out milk price is on course.

NDFCU Chairperson Mr. Abraham Rugut is set announce the success of these negotiations to farmers after engaging other processors and as soon as the new rates are agreed and enacted in due course. 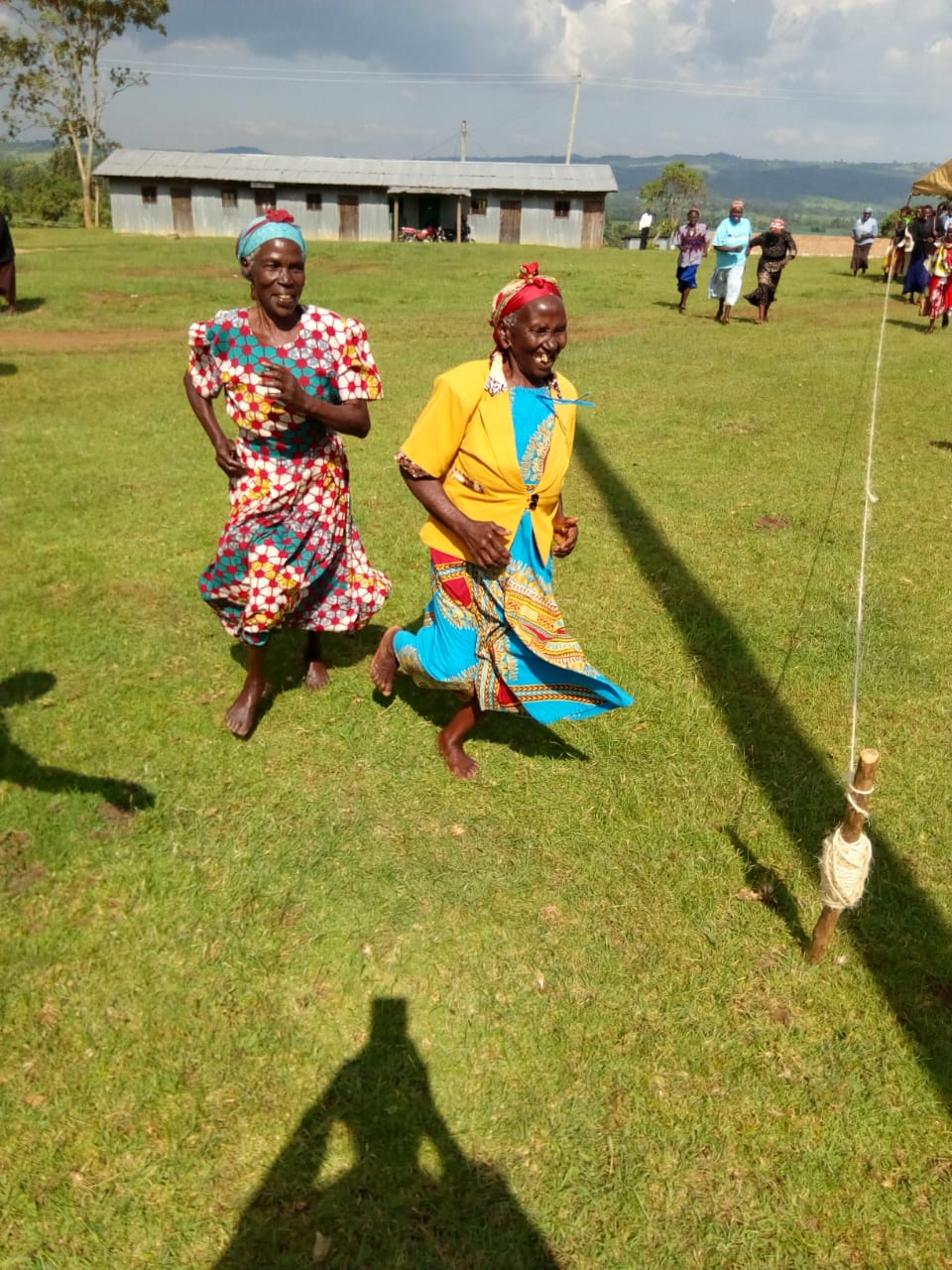 CARE FOR SENIOR CITIZENS ROLLED OUT IN SUB-COUNTIES.

A new program  targeting to provide care to the elderly in Nandi dubbed  AGUI- KOGO Caring Services  has been rolled out in various Sub Counties with the latest been  Kaptumo in Aldai Sub County .

The CBO  which was founded in 2011 with an aim of offering medical care psychological assistance to elderly persons to meet their  Socio economic development needs.

The County Government of Nandi  is offering support to the program through assignment of Social welfare officers  to assist in coordinating and facilitating activities of the program.

Among the activities of the initiative is free medical check up, recreational sports , interactive sessions, exhibition and sale of entrepreneurial Artifacts.

156 senior citizens participated in the event held in Aldai. 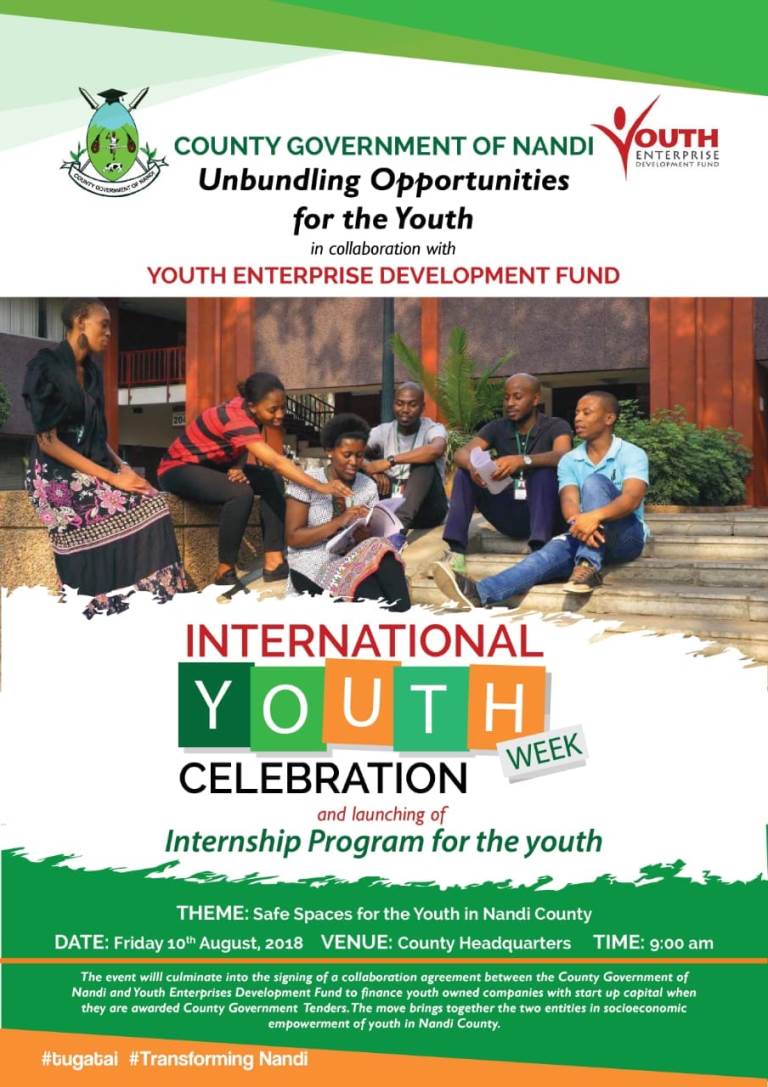 Unemployment is an alarming challenge that has seen educated youth waste away in so many struggles due to the limited job opportunities. The annual graduations that are highly celebrated, be they certificates, diplomas or degrees carry a lot of joy for excellence only for them to mutate into anxiety and restlessness soon after due to the limited job market. Youth end up taking any available opportunities to make ends meet.
The County Government of Nandi through various departments is intentional in addressing the challenges facing the youth in Nandi County.
As the International Youth Week comes to wrap up, the county government is set to unbundle the opportunities that seek to improve the state of the youthful population. The Department of Public Service has unveiled 400 internship opportunities for the youth across the county. This is in line with Governor Stephen Sang’s manifesto that pledged to create internship opportunities for the youth so as to enable them acquire the necessary skills and experience as they enhance their professional growth.

The opportunities that do not require any past working experience is open to any youth with a certificate, diploma or degree from a reputable institution. This will ensure that skilled and deserving youth who may not have had an opportunity to work after their schooling get a chance to work and acquire the required experience as they also serve Nandi County. The interns will be paid a stipend of between Ksh. 8,000 and Ksh. 12,000. Applications can be done through <a href=”https://interns.nandi.go.ke”/> https://interns.nandi.go.ke .

The Department of Education on the other has also opened opportunities for 800 ECD teachers whose successful applicants will have an opportunity to serve for at least three years. The opportunities are spread across all wards in the county as listed in the advert here https://www.nandi.go.ke/downloads-2

Among other opportunities set for the youth on this day include enhancement of the 30% Access to Government Procurement Opportunities. Most youth with start-up companies lack capital even after winning the tenders thus affecting the quality of works done. In a bid to bridge this gap, the county government is set to sign an MoU with Youth Enterprise Development Fund so as to increase the uptake of tenders by youths in the various county departments, and linking up with institutions that provide youth friendly loans for LPOs and LSOs.

On to top of this, the county government is heading towards Performance Based Contracting that enable the youth organize themselves and benefit from the County Government’s funds for maintenance of roads in each ward by performing tasks such as bush clearing, drainage opening, installing culverts etc. Contracts under this program will run for a period not less than 1 year and not more than 3 years.The youth has a role in protecting the environment.

The Department of Youth in conjunction with that of Environment is set to offer youth opportunities to benefit from being engaged in planting trees, establish nurseries and supply the seedlings to the county government under an agreed framework.

Among other programs are entrepreneurial training and start-up support, sponsorship for training and acquisition of technical skills and opportunities for scholarships and sponsorship’s based on talent where the county government will identify, exploit and support in the development of youth talent while engaging stakeholders who can extend scholarship opportunities for such talents. 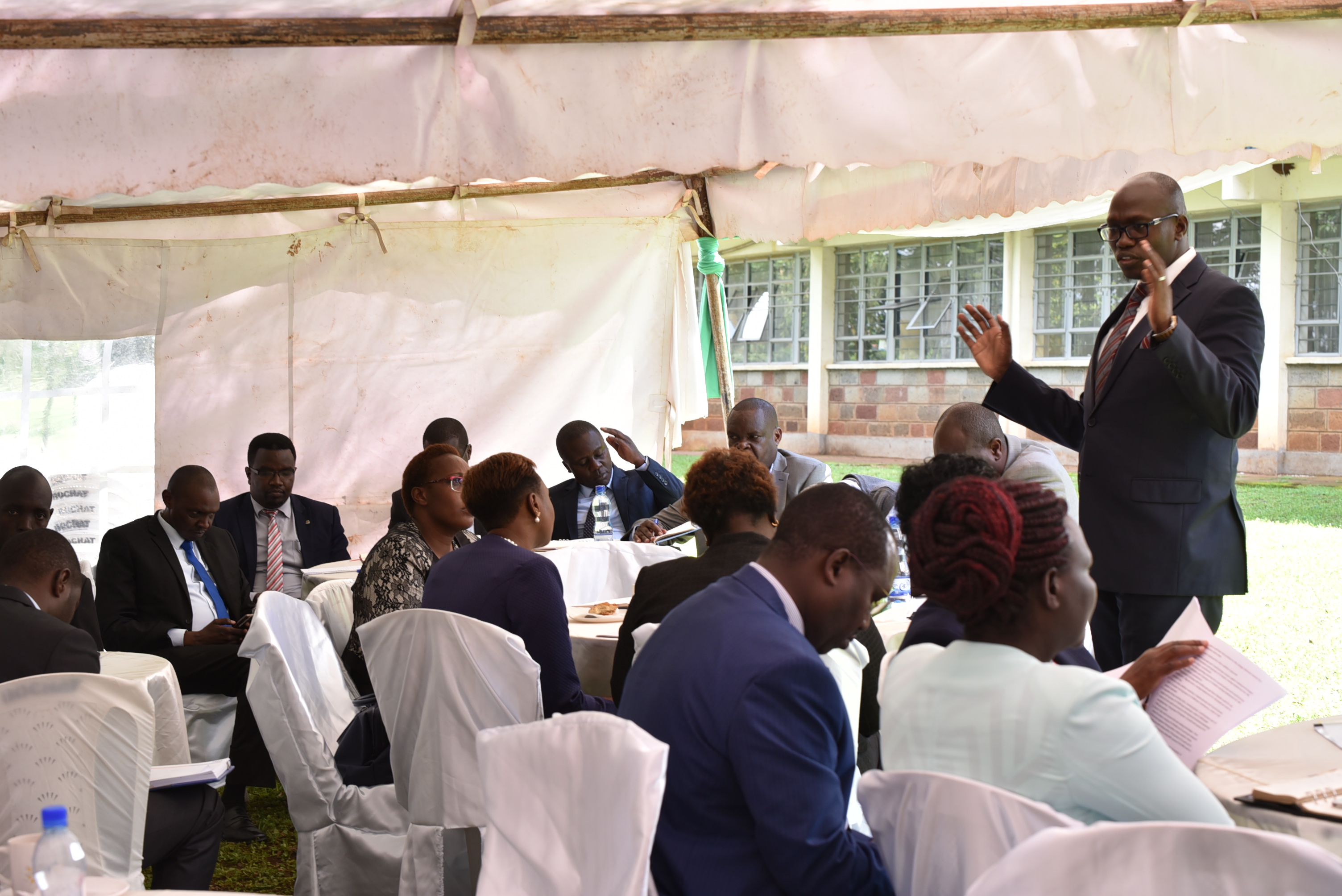 A committee chaired by Deputy Governor Dr. Yulita Mitei that is tasked with the process of aligning the County Integrated Development Plan (CIDP) with that of the National Government’s Big Four agenda held a meeting to deliberate on the structure that is going to guide and align county’s agenda with the National’s agenda of the Big Four.

The County Government of Nandi is seeking to seize and leverage on this timely opportunity and fit in the national government’s plans as it strives to transform lives through manufacturing, Agriculture, affordable housing and universal healthcare. 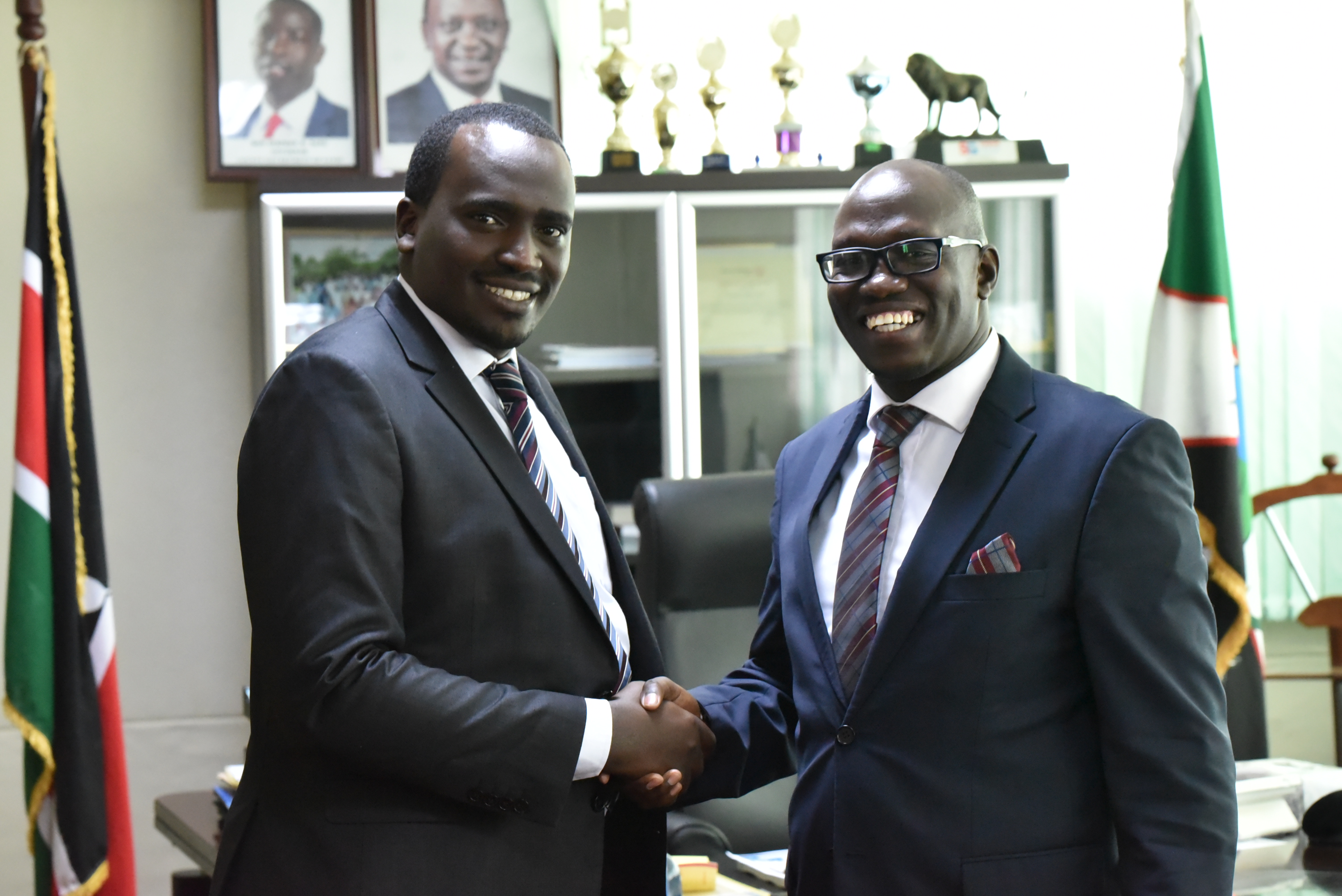 Transnational Bank seeks partnership with The County Government of Nandi

Going forward, the two entities will work together to spur innovation around trade, cottage industries, cooperative development and health in order to create jobs and improve service delivery to the residents of Nandi County. The courtesy call comes at a time when  The county’s leadership is at advanced stages towards launching the Tuga Tai Big 4 agenda that will focus on manufacturing, affordable housing, quality provision of health services, This therefore provides a great opportunity for the two entities to craft a formidable partnership.

The county government will make strategic partnership with development partners who are aligned to the government’s transformation agenda.

One of our Objectives is to ensure continuous increased agricultural productivity is through conservation of our biodiversity.

In this view, the county government of Nandi through the department of Agriculture in partnership with United Nations Environmental programme (UNEP), Alliance For Green Africa Revolution (AGRA) and Kenya Agriculture and Livestock Research Organization (KALRO) held an Agricultural exhibition and Trade fair at Chepkumia Ward where six demonstration plots have been established in a bid to equip farmers with knowledge and instil the importance of practicing conservation agriculture.

Agriculture and Cooperative Development CECM Wilson Taiy reiterated the County Government’s commitment to fully support farmers to benefit from their farming activities through provision of adequate and necessary extension services.