The County Government of Nandi through the department of Agriculture and Co-operative development is building on structures to upscale the maize value chain. Key among the paths to this realization is the need to use the economical power a cooperative framework holds, in securing investments and the legislative advantage it possesses.

Maize stakeholders as participants during the workshop

It is in this light that on Tuesday, a sensitization workshop with maize stakeholders including maize farmers drawn from every sub county was held. The aim of the sitting was to engage the participants on the use of co-operative structure to aggregate different self help groups dealing in maize including individual maize farmer to form co-operatives as a merger into an economical organization for effective commercialization.

As accessed small scale maize farmers in Nandi have limited access to factors of production, credit and information, and their markets are often constrained by inadequate property rights and high transaction costs. To avert such inadequacies posed, was of the direction that maize farmers upon sensitization and clear understanding of the role of cooperatives, will take up the co-operative approach to adapt to the changing economic environment usually harsh to individual operation. 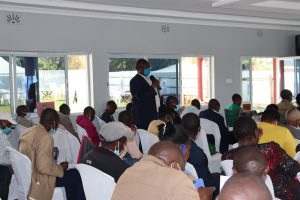 Maize investor participating during the workshop

Discussed during the workshop were the principles of cooperation, development of a flexible co-operative structure tailored to the needs of Nandi farmers, transaction cost economics favor to numbers, analysis of cooperatives in general, cooperative formation, cooperative growth, its economies of scale and having an investor oriented focus while doing business as a co-operative.

Among the participants were maize farmers in self help groups and others in companies and there was a considerable debate on whether commercial farmer interest are better served by cooperatives or in individual groups. From all the proponents discussed it was clear that working as a cooperative puts farmers at a best position to work with government hand in hand, have easier access to various source of capital, are better able to have a monitored top quality management, and also with a shared interest ,members have an influence over cooperative functions and activities.

Speaking during the meeting the Chief Officer Co-operative Development Dr. Benadatte Tiony highlighted on the powerful influence a cooperative, based on its service principle in area supply and marketing has over government partnerships and in doing business.

She stated that it is high time maize farmers move from formation of cooperatives to talks of how to do business while in cooperatives. This owes to the already known fact and evidence that to be smart and profitable in any agricultural venture is the pooling of resources to do business.

She also stated that the government role is to support the farmers in areas regulation, management, training, and creating ease in seeking favorable partnership with high end investors. On the same she highlighted on the independence cooperatives have thus their enjoyment of neutrality and ownership of ideas and resources.

She encouraged the members to be convinced and start formation of maize cooperatives where there was none and further move as a team to formation of a union, an even more powerful co-operation.

Dr. Tiony further reaffirmed the support of the County Government and stated that she will be on the upfront to ensure the farmers are well equipped to form maize cooperative societies in every sub county.

Director Cooperative development Mr. Stalin Koech informed on cooperative principles as the route that binds operations in cooperatives, highlighting on why having a well structured principles allows for democratic control, economic participation, autonomy and independence.

Mr. Koech also informed on apex organizations that understands cooperatives and has the mandate to ensure smooth facilitation of the needs of cooperative societies. These are Kenya Union of Savings and Credit Co-operatives Limited (KUSCCO), Co-operative Alliance of Kenya, Co-operative bank of Kenya and CIC Insurance.