Gracing the event, Chief Officer Cooperative Development, Dr. Benadatte J. Tiony applauded the society good progress and urged them to continue impacting the society in their role to support the each other economically.

She also recognized the traversing ability Apple Sacco has achieved in serving two counties. The Sacco has expanded its service membership to the neighboring county Vihiga, a unique feature most Sacco’s in Nandi are yet to achieve.

The Sacco has also embraced the Front Office Service Activity which is performs banking like activities for the Sacco and is fully integrated with Back Office Sacco Activity.

Dr. Tiony also stressed on the importance of SACCOs. She stated that they are a key component to the economic wellbeing of the society.

She more so confirmed that Cooperative Societies contributes largely to the economic score of Nandi and thus why the government is keen to collaborate and include cooperatives among its key transformational agendas.

“Cooperative societies in Nandi have a share capital of over one billion and a turnover of the same hence they stand as economic and social pillars of communities in Nandi.”

The Chief Officer assured the SACCO of the government support, and pledged to facilitate a capacity building training to the society’s management and members.

She also pledged to give the SACCO 5000 coffee seedlings. The provision of coffee seedlings is among the many programs by the County Government aimed at improving the cooperative sector for more economic benefit to farmers in Nandi.

On that note, she informed the members on the need to use the government resources at their proximity like the Kaimosi Farmers Training Centre and the institution bus to build their organization.

The chief officer also urged the members to put in consideration the principle of good governance for the success and smooth operation of the Sacco.

She highlighted on the cooperative office restructure on the compliance framework.

“The office is channeling more structure to the adherence of legal cooperative governance framework. The emphasis on this will amplify transparency in cooperatives, enhance trust among cooperatives thus lure more people to join cooperatives to the immense benefit of all.

Dr. Benadatte concluded that the department will continue supporting and strengthening cooperative societies saying they are instruments for rapid economic growth in the county.

Apple Savings and Credit Society has over 4000 delegates as a representation of its members and is one of the best performing SACCOS in Nandi.

Also in attendance was a representative from Metropol  Credit Reference Bureau (CRB)  who led the members through an extensive talk on the importance of managing cooperative funds frontly through their systems to discourage loan defaulting  and encourage easy management of cash in the cooperative society. 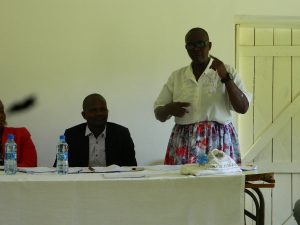 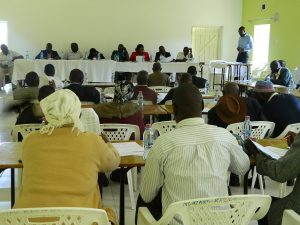 Sacco delegates following through the meeting