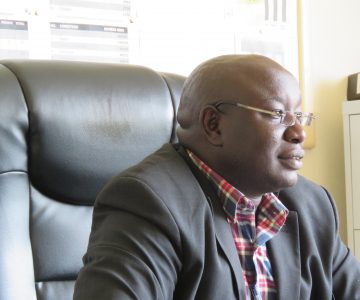 COUNTY STEPS UP WAR AGAINST RABIES

World Rabies Day is an International event that takes place each year on September 28. World Rabies Day aims to raise awareness among the community about the impact of rabies on humans and animals, provide information and advice on how to prevent the disease, and how individuals and organizations can help eliminate the main global sources. Rabies is a neglected disease with devastating consequences. Comparatively, the cost of post-exposure treatment in human is approximately 50 times higher than prevention through vaccination of the animals which are the main source of the infection. This year, the departments of livestock, health and sanitation and that of Sports in partnership with Sharon Live On Foundation http://sharonliveonfoundation.org will hold Nandi Run 4 Rabies 10km race and 2km Kids race on September 22 at the Kapsabet showground to create rabies awareness in Kapsabet ward, Emgwen sub county.

Speaking in his office during a meeting with officials from Sharon Live On Foundation and Athletics Kenya – Nandi Chapter, the county director for health Dr. Joseph Kangor said rabies is a big threat to the lives of Nandi residents, but some dog owners don’t know the risks of keeping a dog which has not been vaccinated.

The county government is now spearheading vaccination programmes which will be held in all major towns, as well as rural settlements in Nandi.

“Regardless of whether or not the area is accessible by road, we will try to reach out as far as possible, especially areas along the sugar belt since the regions have high cases of dog bites owing to the fact that sugar plantations are home to stray dogs,” said Dr. Kangor.

Dr. Kangor further called for partners to join in the fight against rabies saying the human anti-rabies vaccines are too costly.