The Government of Nandi is fully committed to delivering all the promises it gave to its residents. Despite inheriting stalled and poorly done water projects, Governor Sang’s administration has rehabilitated and launched new ones in a bid to ensure residents have access to clean and sustained water supply. 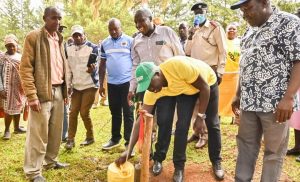 Governor Stephen Sang has been on a development tour around the county commissioning projects including ECDEs, dispensaries, maternity wings and water projects. He officially launched Chepteon water project and Kaikaro Biribiriet water project both in Ngechek ward. The two projects will serve several institutions in the area and more than 700 households. Chepteon will serve 400 households while Kaikaro Biribiriet will serve 300 households. The two projects also aim to improve agribusiness as the county is considered one of Kenya’s bread baskets.  The jubilant residents thanked the governor for delivering his promise since he last visited the area as they have always wanted water at their doorstep. The residents also requested that the distribution network be expanded so that it can serve more people. 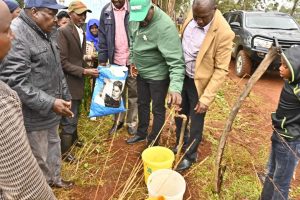 Present at the launch was CECM Lands, Water, Environment and Natural Resources Dr Bureti Philemon, CECM  Roads and infrastructure Drice Rono, MCA Ngechek Ward David Bwambok and Director Richard Lelei. The Governor thanked the people for the warm reception they accorded him and promised to deliver on the pledges he  made.