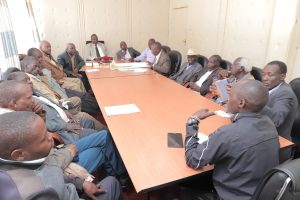 The Kamwega community settlement were today at the Nandi County Secretary’s office to seek resolution into the boundaries wrangles between them and Kenya Forest Service (KFS). In a meeting which brought together The County Secretary Dr Francis Sang, Kaptel/Kamoiwo ward MCA Mr Willy Maru, Lands Environment, Natural Resources and Climate Change Chief officer Mr Solomon Mangi’ra and the KFS, the community through their representatives claimed that KFS has gone against their rights by destroying their households and other properties in what they (KFS) term as restoring the forest.

Furthermore, they alleged that the KFS has been conducting restoration exercise forcefully referring to the incident on last Saturday where the officers allegedly ordered the community to vacate their households. According to the community the KFS officers carried on with the exercise despite a case on the on the same land being before the Land and Environment court.

On their part the Kenya Forest Service maintain that they only carried out the exercise on the settlements with no cases in the court, sentiments which were strongly opposed by the community.

Finally the County Secretary pleaded with the two parties to down their claims and allow the court to carry out the process of finding the verdict asking the KFS to hold the restoration exercise until the ruling is made. They agreed to bury their difference so as to pave the way for the court ruling on the matter.