The county government of Nandi, through the Public Service Board has set the pace by becoming the first county among the forty seven (47) counties to conduct phone interviews through the already established Call Centre.

The phone interviews come after the Public Service Commission in conjunction with the Ministry of Health advertised 5500 positions of contractual health workers to stem the spread of Covid-19 that is already battering the global economy. The positions are drawn from nine (9) cadres of health personnel. The recruitment process, however, was done by the County Public Service Boards in different counties.

The Nandi County Public Service Board received 2165 applications for the various cadres as shared by the Public Service Commission. Out of this number, 530 successful candidates were shortlisted for the interviews scheduled for May 4 and 5 2020. Check www.nandicounty.go.ke/jobs . Successful applicants recruited under this category will be deployed within primary health care facilities within the County Government of Nandi.

Nandi County Public Service Board CEO Jacob Sisey expressed his great satisfaction with process explaining that board opted to use the call center as a platform to conduct the interviews because of the Covid -19 Virus which continues to affect the counties. He further stated that the phone calls interview we convenient and played a great role in removing the cost of transport and time spent by the applicants on the interview. 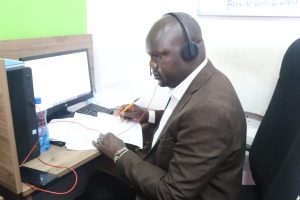 He is confident that through the online interviews, CPSB will be able to get the qualified persons based on the preset criteria that include; gender, regional balance, persons living with disabilities and the marginalized communities. Membership to a professional body and the applicants’ practical experience also played a key role in establishing the successful applicants.

The County Secretary Dr. Francis Sang conveyed his approval on the telephone interview process saying the Call Centre has contributed immensely in undertaking such a very important task professionally and efficiently.

Irene Choge, Member of the Nandi County Public Service Board

Ms. Irine Choge, a Public Service Board member expressed great satisfaction with the phone interviews, explaining that the interviews have made it  easy for the successful applicants because it saves time, the cost of transport and inconveniences caused by the the corona pandemic.

Nandi county not only remains as source of champions in the athletics, a bedrock for agriculture, advanced health care services but also a pace setter in the advancement and adoption of technology.

In March 2019, the County Government of Nandi set up a Call Centre with a toll free number 1548. This is a milestone project by the department of Information Communication Technology and E-government, with aim of promoting open governance and ensuring that citizens are engaged in the decision making within the county government.