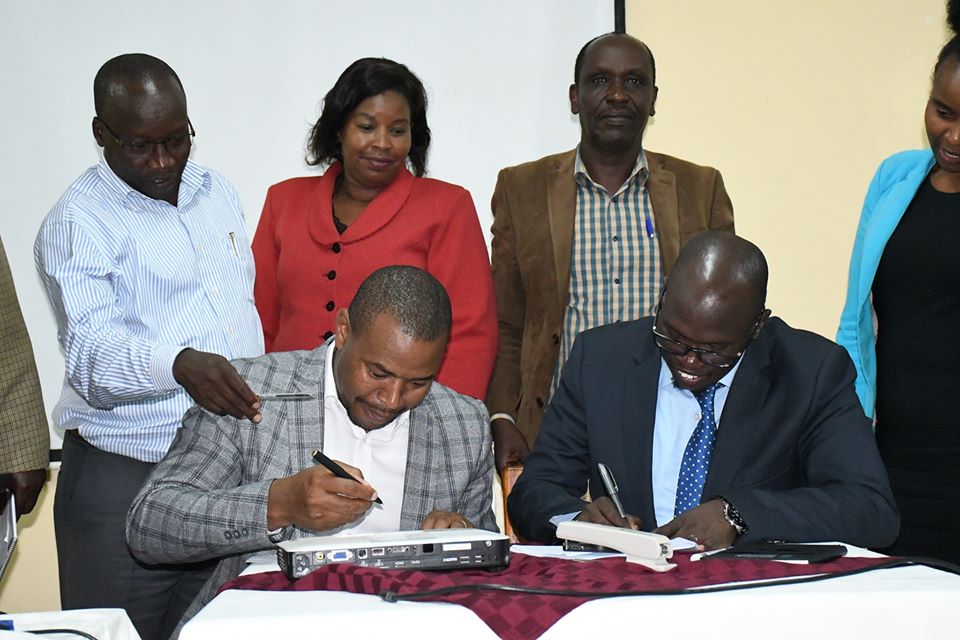 The County Government of Nandi on Monday presided over the signing of a Memorandum of Understanding (MOU) between dairy cooperative societies and Digicow as the county moves towards digitization of Agriculture extension services to enhance service delivery.

This is a follow up of the formal launch and partnership between 16 counties across the country and the 14 innovators identified through the “Scaling up Disruptive Digital Technologies in Kenya Agriculture” event that was held in April 2019. The event culminated in the identification of 14 most promising digital technology innovators in agriculture who were then awarded membership to the One Million Farmer Platform.

Digicow is one of the 14 Disruptive Agricultural Technologies cohort that was identified and awarded membership to the one million farmer platform. On 9th December 2019, during the launch of the Platform, Nandi Governor H.E Stephen Sang signed an agreement between the County Government of Nandi and DigiCow.

The one million farmer’s platform is an initiative aimed at ensuring up to one million small scale farmers in Kenya can utilize digital solutions to increase their productivity and profitability. Nandi County is looking forward to having over 100,000 farmers in Nandi on the platform by the end of the project.

While witnessing the session, CECM Agriculture and Cooperative Development, Dr. Kiplimo Araap Lagat noted that DigiCow will go a long way to ease dairy farmers’ links up and access to extension services.

He asked the cooperatives’ management present to attach value to the technology and mobilize farmers to embrace it as a solution to their pulling of resources.

Dr. Lagat also assured them of the continued support of the county government in leveraging resources available under the National Agricultural & Inclusive Growth Project (NARIGP) and county resources towards investments that will benefit farmers.

On his part, Chief Officer ICT & e-Government Mr. Jonathan Misoi revealed government’s vision to have a data driven policy formulation in not only Agriculture but also in all other departments. It is cognizant to this that he says the County Government through his department has set up a Data/Call centre to gather accurate information key in prudent decision making.

He further hinted a possible synchronization and integration of DigiCow App and already acquired Digi-Farm platform set to be rolled out later this month. “The Government is in talks with Safaricom and DigiCow among other digital solution cohorts to ensure we plug in all Distruptive Agricultural Technologies into our system and have all services offered from one platform” added Misoi.

He challenged farmers to embrace and leverage on technology to increase their productivity and move to the next level.