Article 235 of the Constitution of Kenya (CoK) has the provision for every County to have its own public service managed by County Public Service Board(CPSB). This board is charged with the responsibility of developing and implementing human resource policies and framework for the county government in relevance to the law.

County Government of Nandi has always been compliant to the Constitution and has had its first County Public Service Board established in 2013. The first County Public Service Board had Mr Samuel K. A Too as the chairperson together with Dr. Francis Sang, Ms. Grace Sugut, Mr. Kimeli Chepsiror, Ms. Mary Ngeny & Mr. Sammy Sareto as members; and Mrs. Esther Letting as the Secretary. Mr. Jacob Sisey later joined to take up the duties of the Secretary following her transfer of service to the national government. 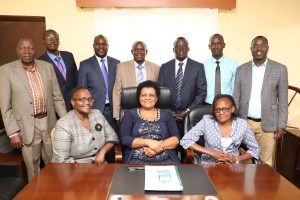 Having completed their Six (6) year non renewable term in August 2019, the first board today passed on the mantle to the new one which is going to serve for the next six(6) years. The new board taking over has Dr. Daniel Kemei as the Chairperson working with the following members: Mr. Ezekiel Kiplimo Chemwor, Ms. Eliseba Jemutai Arusei, Mr. Daniel Kiptarbei Rutto Mwogoi, Mr. Jacob Kipketer Sisey and Ms. Irine Jepkorir Choge.

The outgoing Chairperson handing over the report to the incoming chairperson

Presiding over the handing over, the County Secretary, Dr. Francis Sang appreciated the outgoing members for their six years of diligent service. As he ushered in the new members of the board, Dr. Sang emphasized on maintaining high level of professional ethics and adherence to the law in all undertaking by the board.

Signing of the handing over report

The incoming CPSB chairperson, Dr. Daniel Kemei together with his team vowed to work for County Public Service in diligence, transparency, accountability, impartiality and with integrity for the common good of the citizens of Nandi County.