The department of Finance and Economic Planning, according to Public Finance Management Act (PFM Act) of 2012, is charged with the responsibility of preparing the annual budget for the county, coordinating the preparation of estimates of revenue and expenditure of the county government and the implementation of the budget of the county government.

The department is currently developing the County Fiscal Strategy Paper(CFSP) for 2020/2021 which is key document in the budget making process. CFSP help in setting the ceilings and clearly state the priorities by each sector. This is done by the sector working groups in the departments together with all the stakeholders.

Today a team from AHADI and Poverty Eradication Network (PEN) together with representatives from Nandi County civil society Network (NCCSN)to assess on the preparedness and progress ahead of budget making process for FY 2020/2021.

Speaking during meeting with the team, the CO for Economic Planning, Felix Sambu, said that once the CFSP is ready, the department will then engage the public in the budget making for FY 2020/2021. Thereafter, the budget is then tabled at the County Assembly for approval before adoption and implementation. 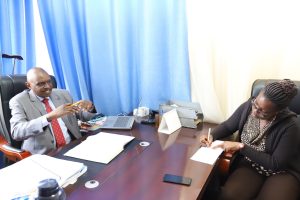 Felix Sambu, CO for Economic Planning speaking during the meeting.

He further acknowledged AHADI for offering Capacity building for both the county officials and members of NCCSN especially on matters of public participation and Citizen engagement in all county plans, projects and programs implementation.

Mr. Sambu added that the department of economic planning is partnering with that of ICT and e-Government to establish a system that would monitor the implementation of government projects from start to completion. The system will track the status, progress and manage timelines for these projects and programs. 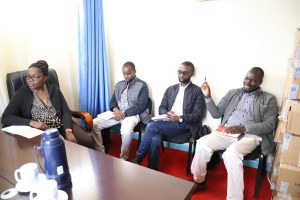 The team led by Judith Gouchi and Ludivicus Omollo from Poverty eradication Network added that Nandi County is growing especially on matters of citizens’ participation. They congratulated the county for the Call Centre initiative as a public participation tool giving the public an opportunity to raise complaints as well as give their views and compliments

Mr. Shadrack Tarno , Nandi County Civic Society Network Chairperson,  appreciated the relationship between the county administration and the network pointing out that the county has always valued the society’s contribution especially in county decision making.
He called for the fast tracking of public participation and Civic Education bill to be passed at the County Assembly, get adopted and operationalized so as to help in successful implementation of public participation.