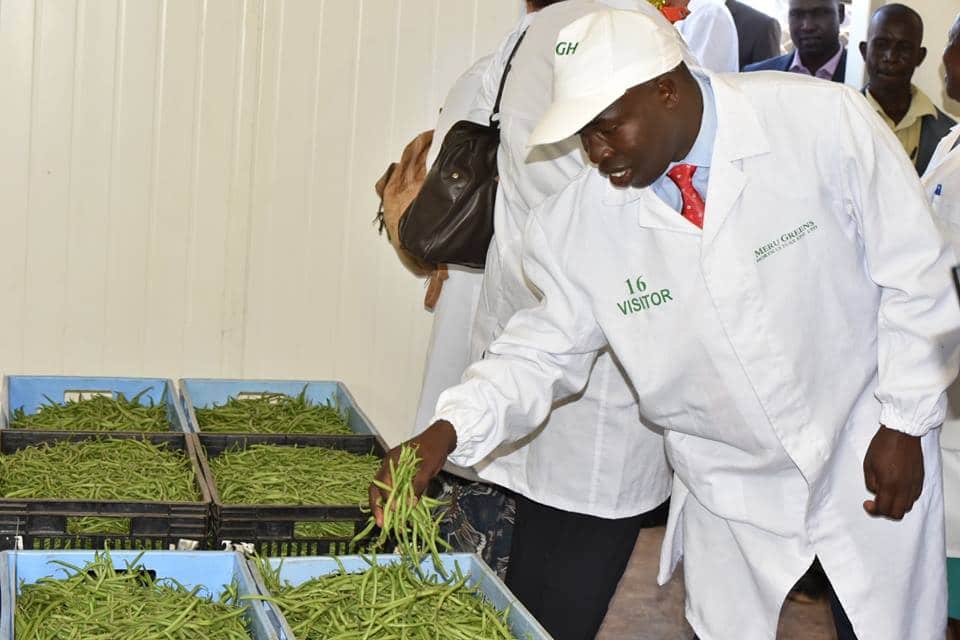 In a function graced by Dutch Ag. Ambassador to Kenya H.E Mertine Uan Hoogstraten, the Governor commissioned the facility which will benefit thousands horticultural farmers in managing and reducing post-harvest losses.

The county boss who was accompanied by his deputy Dr Yulita Mitei, 3 Executive members, 3 COs and a host of MCAs led by the Assembly Deputy Speaker Wilson Sang officiated the commissioning ceremony held at Kibiok ShoMap Market.

In his address, Governor Sang said that French Beans farming is one of the best ventures that perfectly compliment subsistence crop farming. He challenged farmers to diversify and emulate those who have already tried and are reaping heavily adding that his vision is to see canning done at the proposed Nandi Export Processing Zone.

The Governor assured farmers that his administration will continue encouraging farmers to move from subsistence farming to commercialized farming by embracing modern farming methods and diversifying their farming activities.

“As a county, we want to move away from subsistence farming to commercial farming and therefore this facility will go a long way in managing huge harvest of French Beans by reducing post-harvest losses.” added the Governor.

Farmers used the opportunity to testify before the Dutch ambassador how they have been able to make a great fortune out of the ‘Green Gold’.

David Cheruon, a farmer from Tinderet, revealed how he made Ksh 273,000 in six months after investing just Ksh 78,000 in his one acre farm.

Mr. David was elated to further reveal how he managed to sponsor his son to study abroad without fundraising neither for his school fees nor air ticket. “From the cash I made after selling French Beans, I was able to sponsor my son without organizing for any Harambee to study abroad.” said the joyful farmer.

This is the first time farmers are engaged in contract farming with a guaranteed constant year-round price and market. This has been made possible thanks to the MOU signed between Meru Greens and the County Government in 2018.

So far, a total of 850 farmers have been contracted and it is expected that the facility will soon be operating at optimum capacity. According to Meru Greens, a total of 250 tonnes of French Beans have been harvested and exported in less than 7 months.

In the near future, the county government will put up more coolers since the farmers are committed and fired up to plant more French Beans.

Governor Sang appreciated the Dutch government assistance not only through SNV but also through other programs they have supported the county like the milk cooling plants in partnership with the National Government.

On her part, the Netherlands’s Envoy to Kenya appreciated the efforts by the County Government in empowering small-holder farmers in Nandi.