NANDI CO-OPERATIVE SECTOR RECEPTIVE TO BAMBOO FARMING, AN EMERGING VALUABLE AND RENEWABLE RESOURCE IN THE REGION

The objective in which the co-operative directorate builds on is that encompassing bearing of how the co-operative model engages shared responsibility, as the channel of efficiently achieving goals, especially in areas of risk and shared processes for a successful result.

Of the resilience the model provides in new risk initiatives, the County Government of Nandi through the department of Agriculture and Co-operative Development mobilized take up of bamboo, an emerging crop practice, first as an initiative of conserving the wetland areas in Nandi as a liaison with the Department of Land and Natural Resources and second, to have farmers in wetland areas take up this noble initiative, as they benefit economically from the business opportunities the crop provides.

As a composite to the dominant agricultural value chains in Nandi, interested farmers were sensitized to form a co-operative, registered as Nandi Bamboo Co-operative Society. The sense of it was to have them progress together and cushion challenges that may pose, as the farmers get to familiarize their standing in the sector.

On a three-day workshop, the County Government of Nandi through the department of Agriculture and Co-operative Development in partnership with East Africa Bamboo Development Program held sensitization and training to Nandi Bamboo Co-operative Society members target areas farmers and representative counterparts from UasinGishu, Bomet, Kericho, and Busia counties. The workshop was an informative and consultative one that saw an in-depth focus on ways of maneuvering in the venture and holding to a sustainable perspective on the investment. Of major insight was on identifying market opportunities and penetrative linkages to establish strong networks and shareholding in the bamboo market. 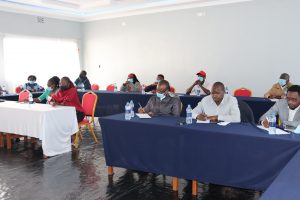 Attendees following through the meeting.

Speaking during the workshop Chief Officer Co-operative Development Dr. Benadatte Tiony assured of the County Government’s support in illuminating and making viable the value bamboo farming provides. Of highlight, she informed on the major contribution bamboo contributes to a proactive role in most of the industrialization goal factors namely, climate conservation, economic returns, innovativeness, and infrastructure development. 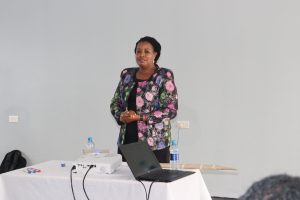 Nandi Bamboo Co-operative Society is now heavily invested in seed propagation and end-product manufacturing done at their warehouse in Aldai Sub County. The society is now looking to expand its market and create viable returns to its members.