As part of our objective to support farmers maximise their potential and increase productivity, the county government of Nandi is providing grant support to aid farmers meet good agricultural practice.

The equipment is efficient in pulverizing dry forages such as hay and shreding of fresh forages such as green maize or napier for silage making. This has been made possible by the County Government through the National Agricultural Rural Inclusive Growth Project NARIGP grants.

The group members are now empowered to prepare sufficient feeds for their dairy herd and ultimately increase their yields. #TransformingNandi

SMALL-SCALE FARMERS BEGIN TO REAP THE BENEFITS OF MECHANIZATION

The County Government of Nandi, Department of Agriculture and Cooperative Development is supporting small scale farmers in the county organized in Common Interest Groups CIGs and Cooperative Societies with expertise and technologies through the county Agricultural Mechanization Services AMS to improve farm
productivity and increase their yields. 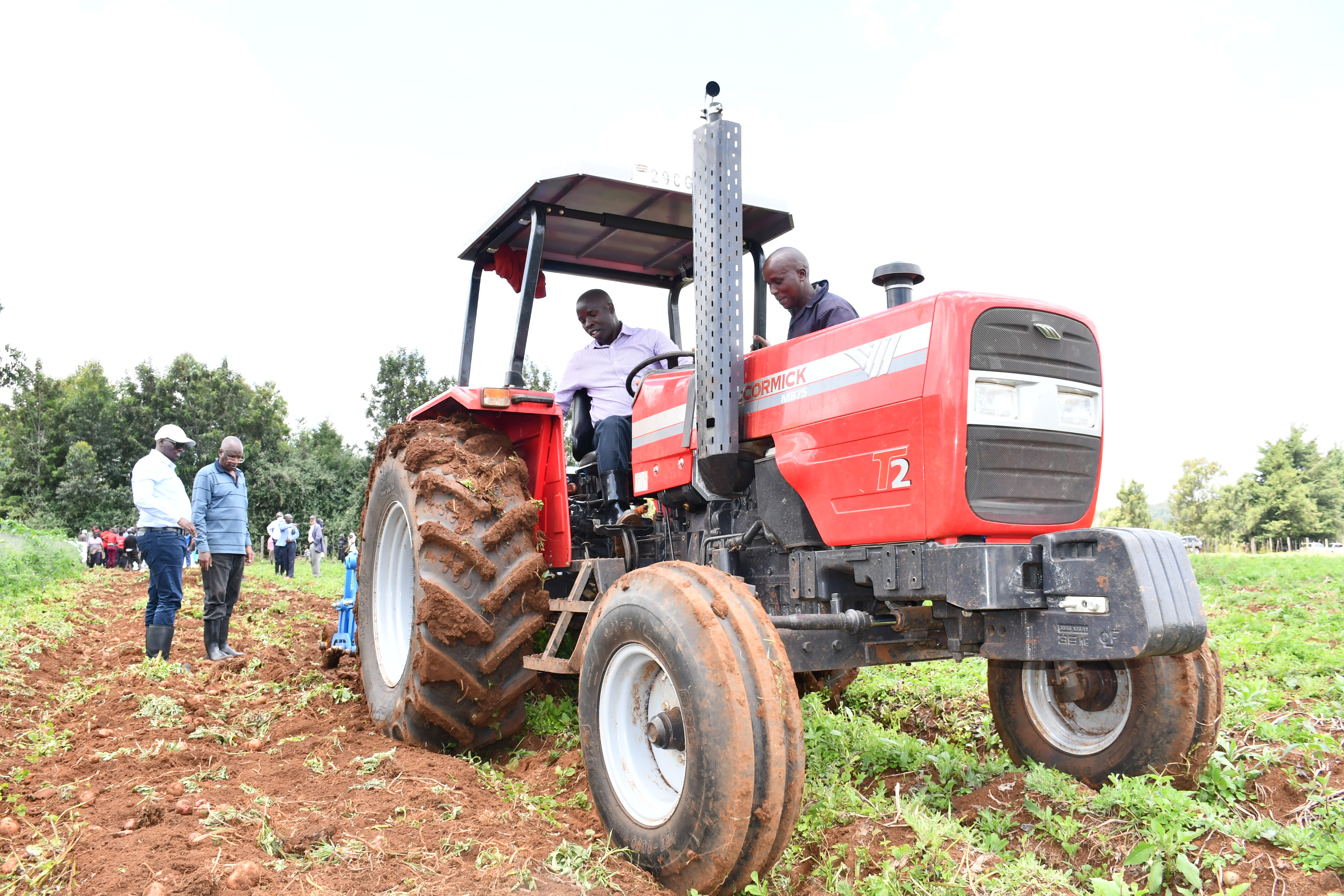 The administration continues to implement ways of achieving both the President’s Big Four Agenda on Food Security as well as the County Integrated Development Plan CIDP which includes mechanized farming, use of quality and certified seeds as well as appropriate inputs.

In partnership with the National Agricultural and Rural Inclusive Growth Project NARIGP,
the administration has scaled up its reach to small scale farmers who in the past did not have access to certified seeds by transforming hundreds of progressive farmers
into seed multiplication agribusiness through mechanization. 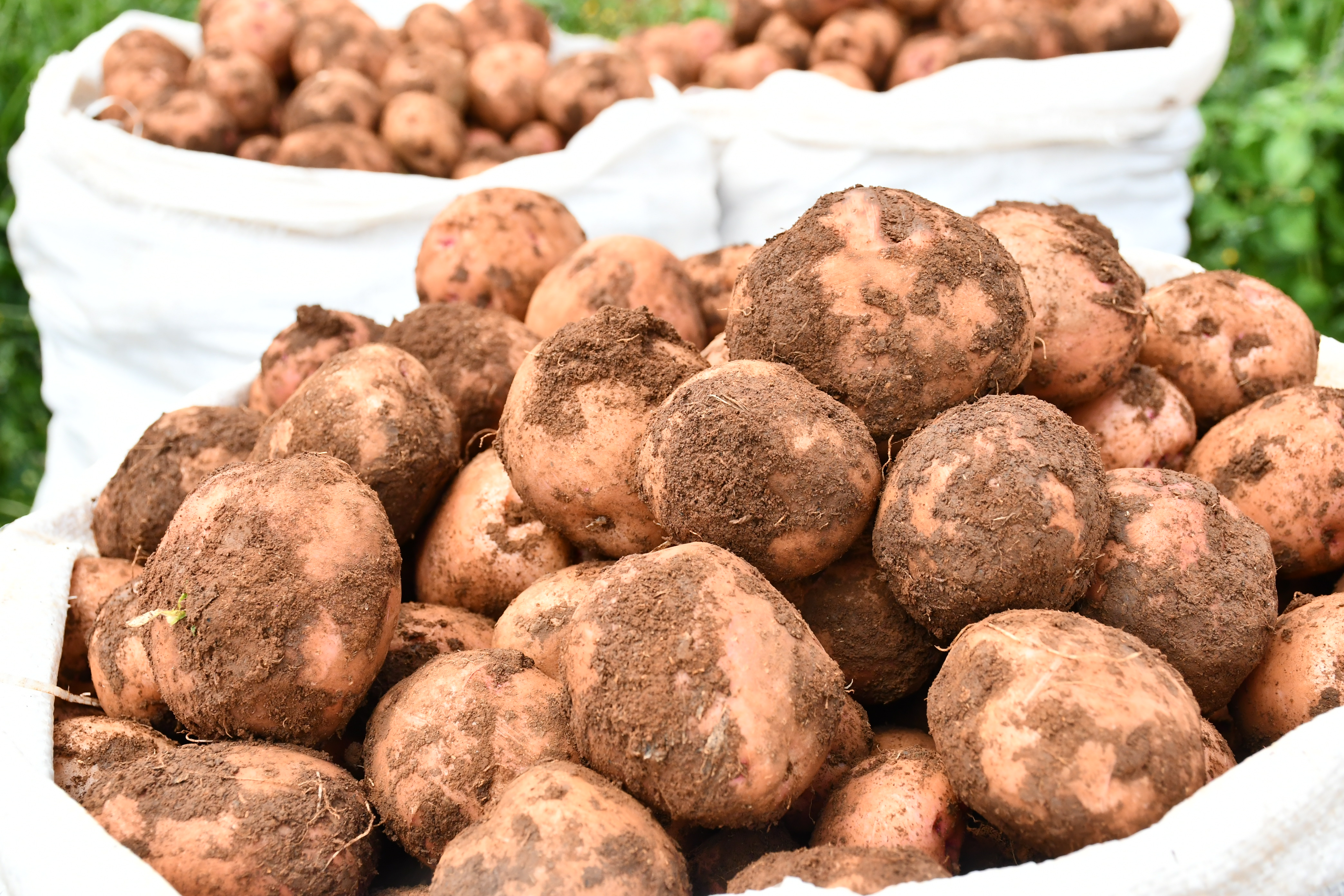 To attain this, the department is empowering farmers organized in Producer Organizations POs scale up their production through the provision of both financial and extension support. Further to this, the county government has availed subsidized farming types of machinery to support farmers with the right equipment at favourable financial terms and thus increase productivity and income. 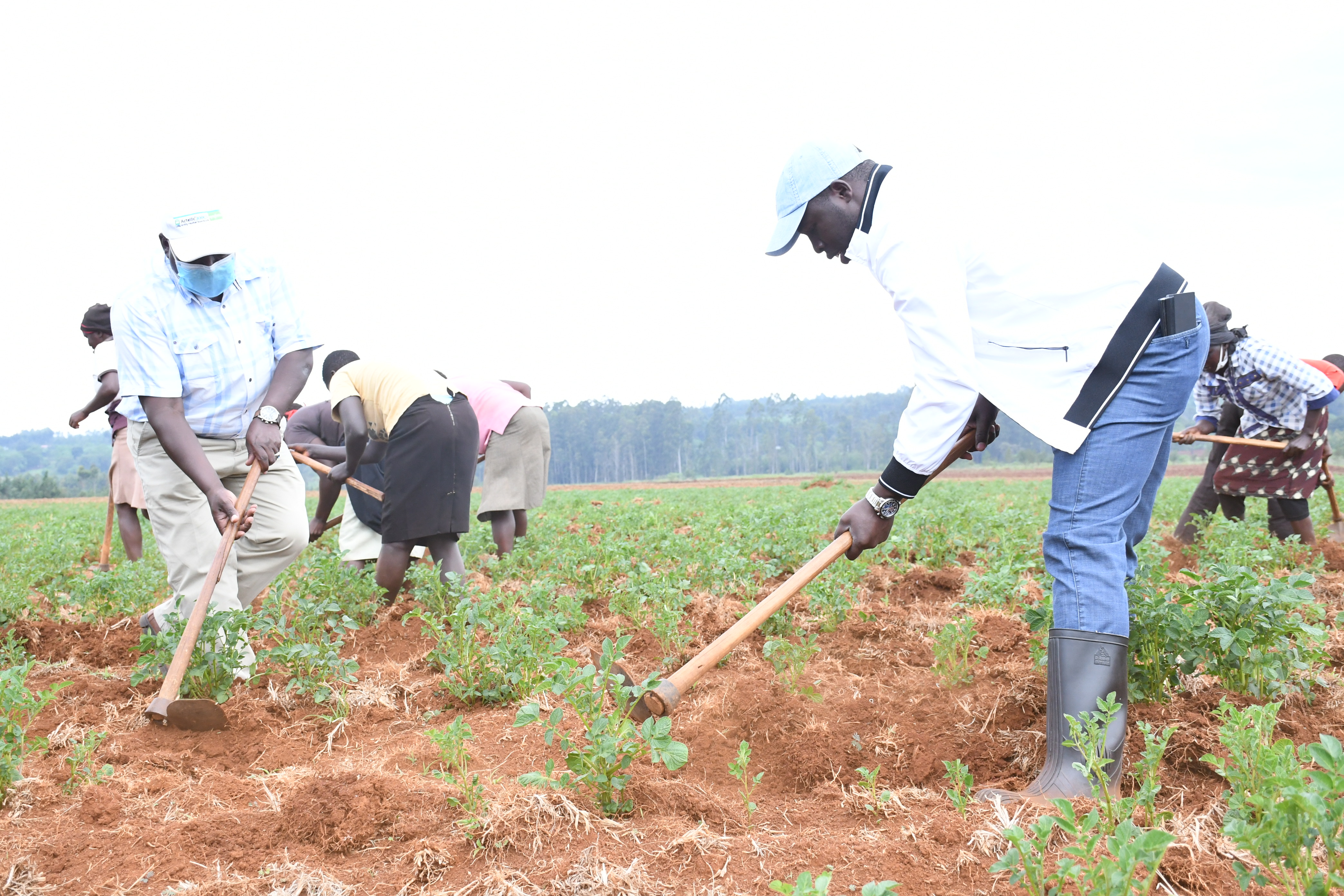 One such group of farmers to benefit from the programme include Nandi Potato Farmer’s Union which boasts of over 1500 members and who benefited from the NARIGP grants to a tune of Ksh 6.9M have managed to increase their production from 50 Kg 600 bags of potato in the last season to 50 Kg 4000 this season and are expecting to further increase their production in subsequent seasons. 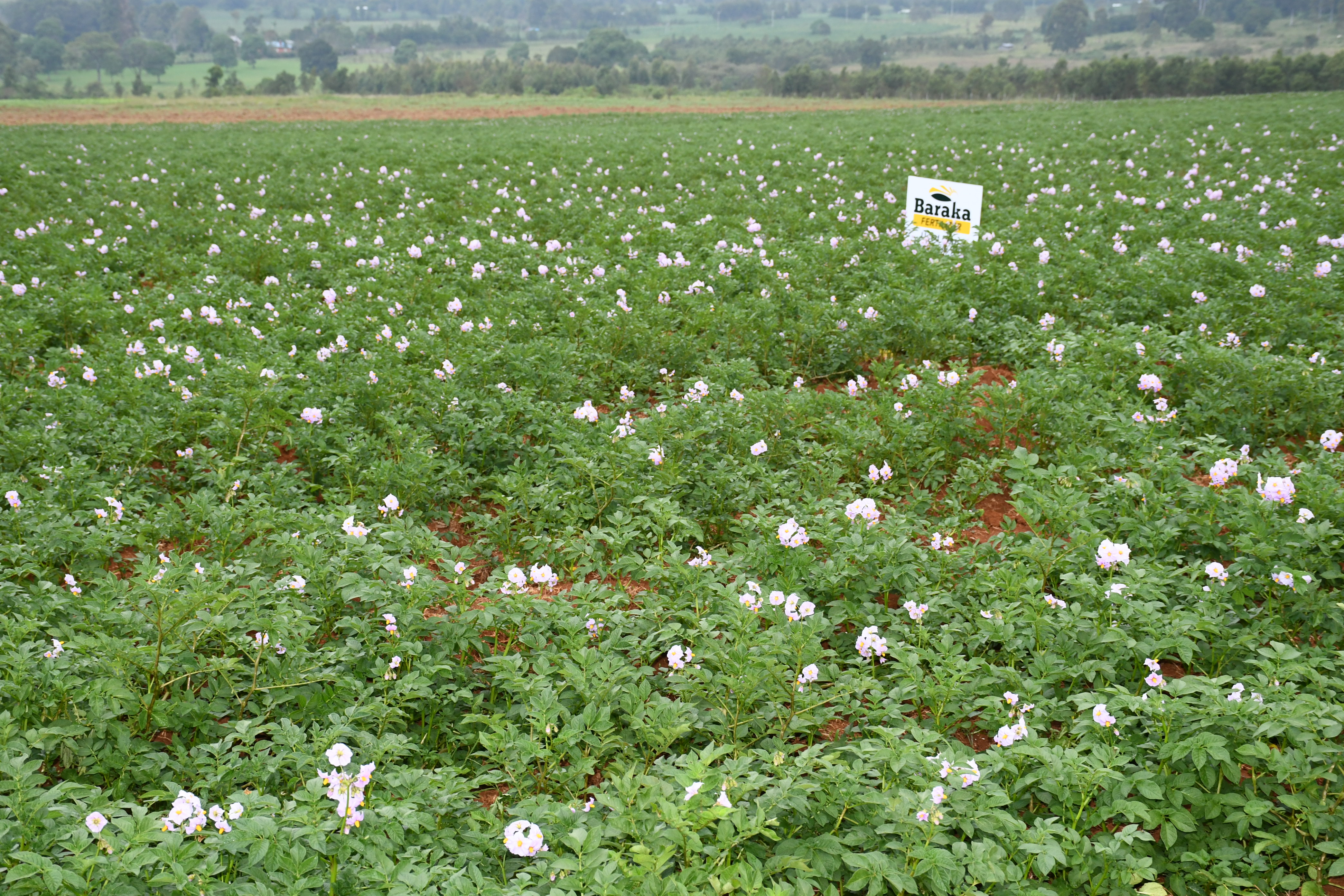 The Union continues to reap the benefits of the County’s Agriculture Mechanization Services AMS including; tractors fitted with the implements to suit all stages of potato production. It has since utilized the machinery for ploughing, harrowing, applying fertilizer, weeding & hilling and now harvesting.

The group members are grateful for the County’s subsidized initiative noting that it has greatly saved them on time and money.

According to the PO’s chairperson Mr. Jairus Sugut, mechanization contributed to their timely preparation of land, efficient land use, and increased production. Mr. Sugut revealed that mechanization significantly reduced their cost of production while creating additional employment opportunities, particularly among women and
youth. 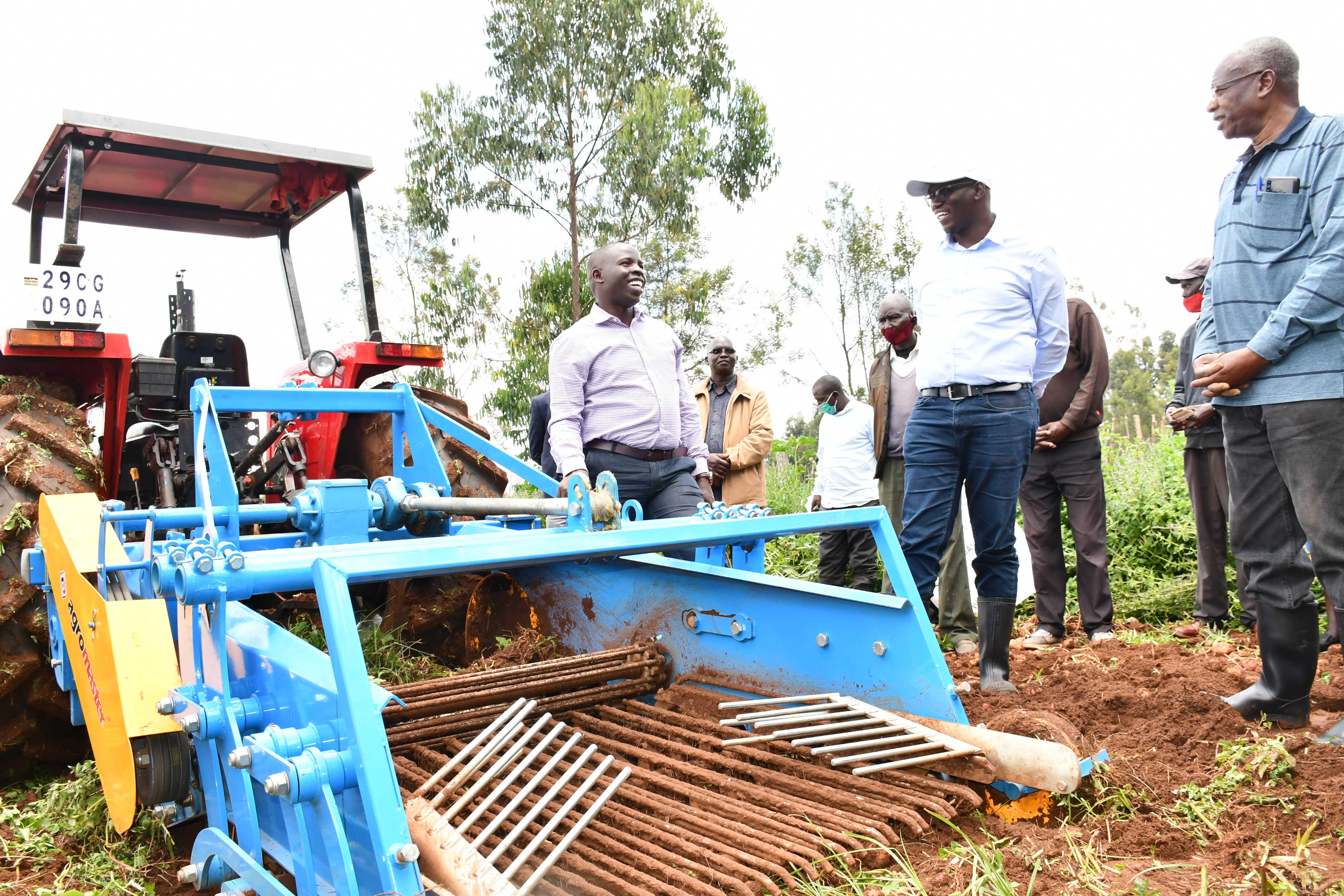 Speaking when he joined the society members in harvesting their 30 acre farm, Nandi Governor Stephen Sang noted that mechanization is a sure way of enhancing farmer’s productivity and increase their income. He challenged more farmers to embrace diversification and mechanization while urging them to use certified seeds among other appropriate inputs if they are to increase their production.

CECM for Agriculture and Cooperative Development Dr. Kiplimo Araap Lagat said that his department is supporting small holder farmers across the county to come together and form cooperatives so that they can leverage on the AMS machinery to ensure route optimization is achieved. 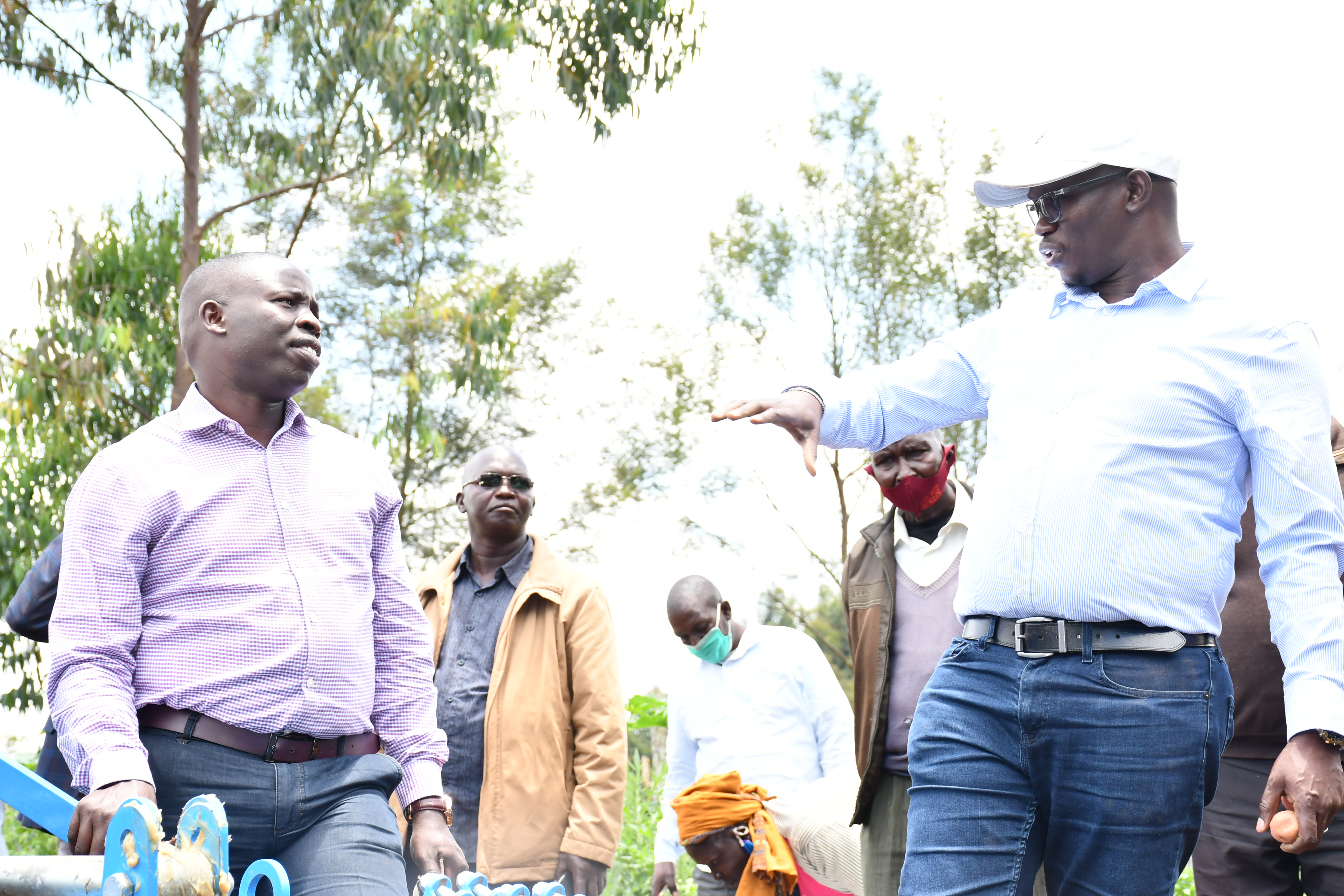 He encourages farmers and cooperatives to emulate Nandi Potato Cooperative Society and embrace mechanization and request for the affordable AMS services by simply calling the county’s toll-free call centre number 1548.

The County is also engaging Hello Tractor, one of the DAT Cohorts, in a bid to digitize the process of booking, requesting, and the overall management of AMS services. #TugaTai #TransformingNandi

The dream of setting up the first farmer owned Milk Processing Plant in Nandi is slowly becoming a reality with the construction of the first phase Nandi Cooperative Creameries NCC nearing completion in Mosop Sub-County.

The new state-of-the-art flagship project whose foundation stone was laid in April 2019, that will have capacity to process 100,000 litres of milk per day, is a dream project of Governor Sang’s administration. 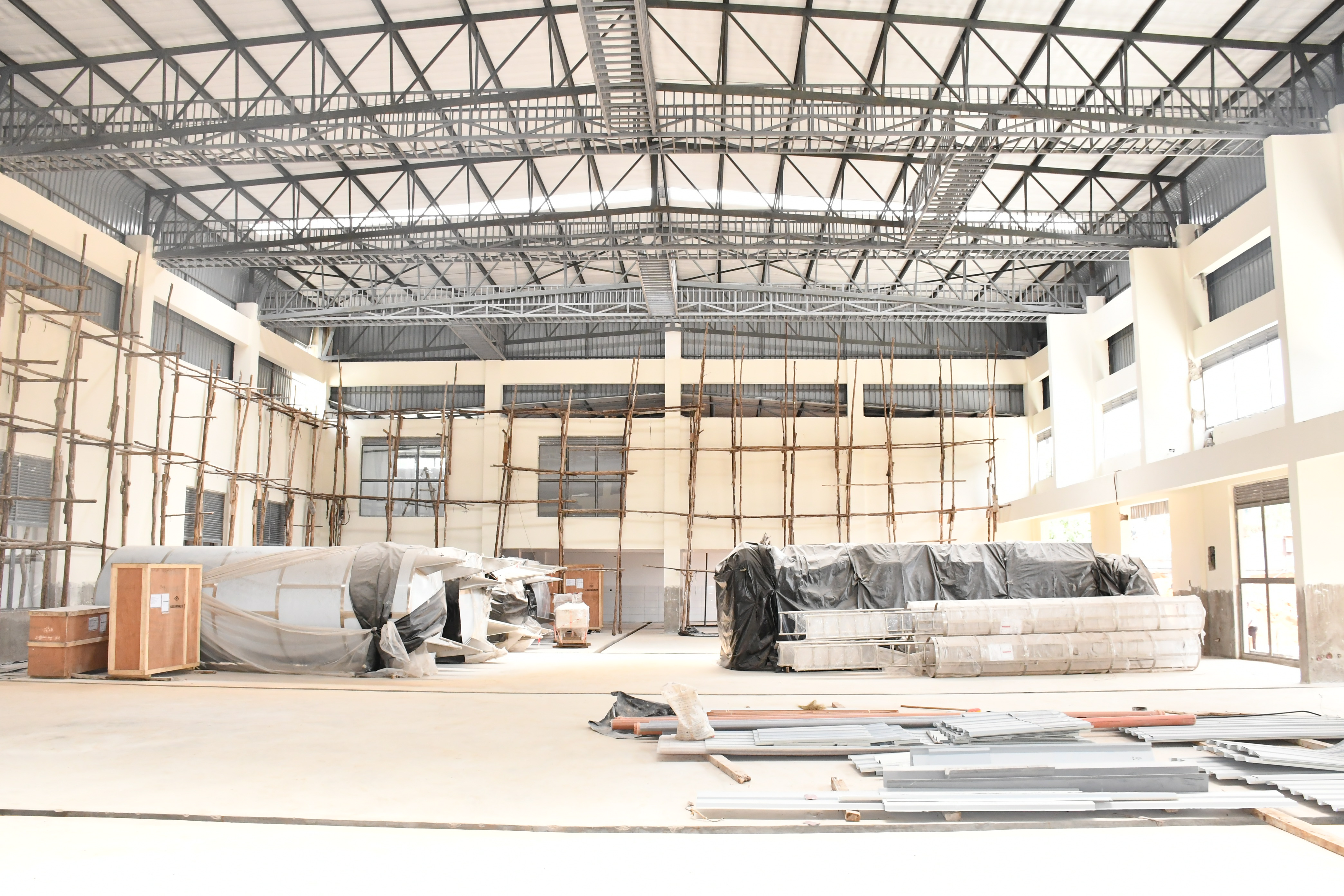 The plant which is likely to be operational by June 2021 aims at empowering dairy farmers’ transition from primary production to value addition and agro processing so as to double their income and realize more profits. 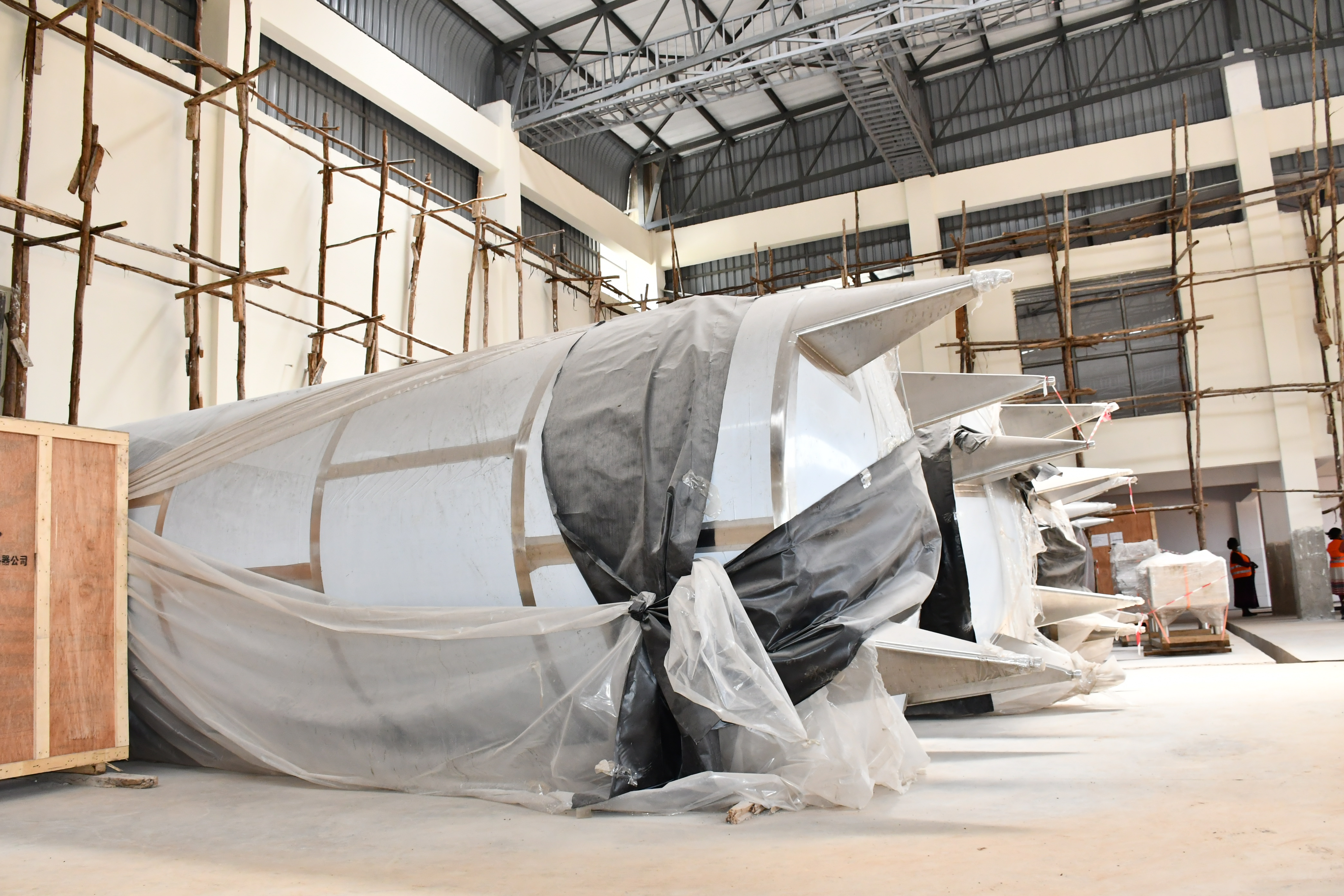 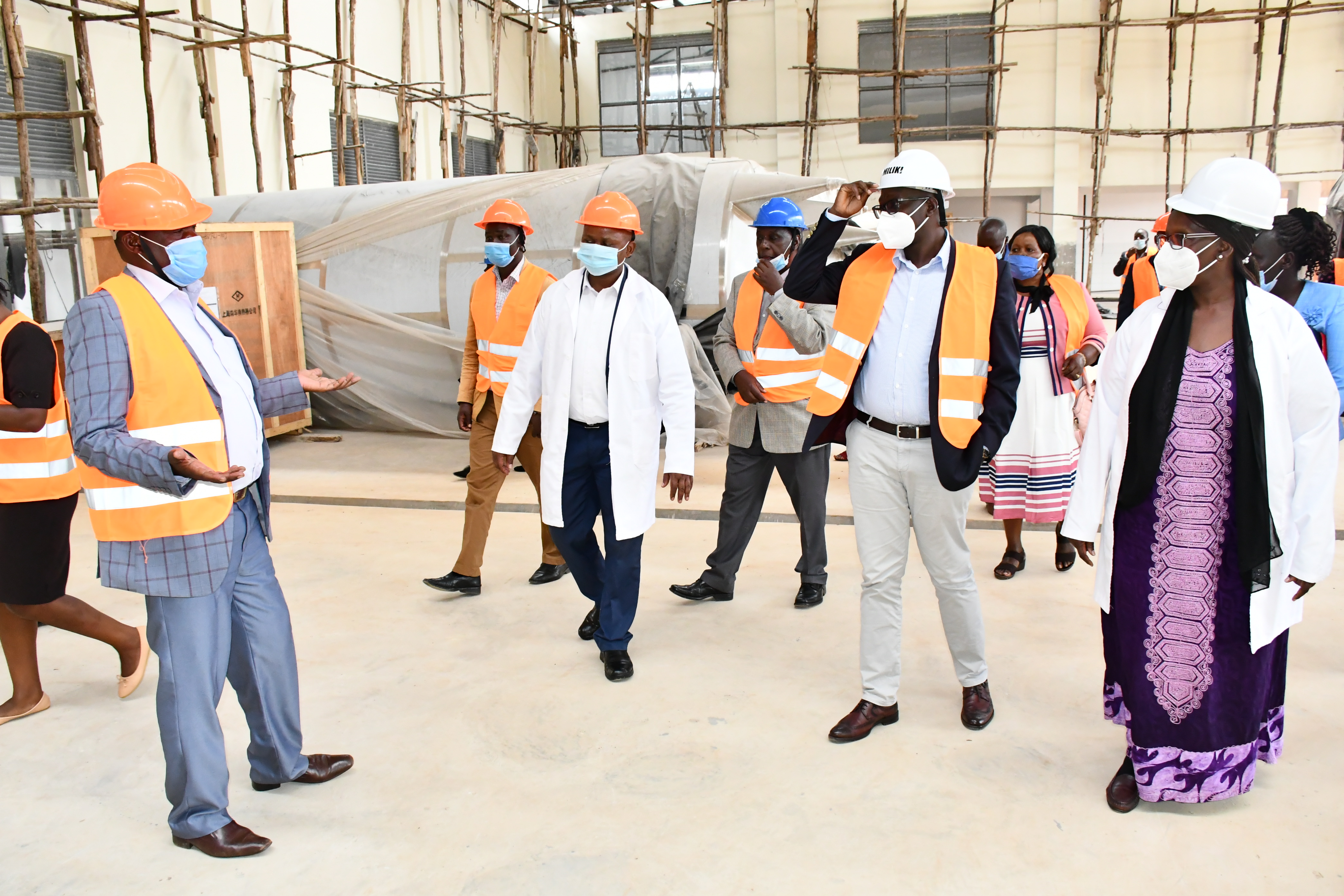 This, he says, is in line with Governor Sang’s vision of transforming and uplifting the agriculture & livestock sectors in the county on modern lines.

On her part, the CAS commended Nandi County on the initiatives undertaken towards transforming the Agriculture sector which are in tandem with the President’s Big Four Agenda on Food Security. She lauded the county government’s effort to assist farmers improve on breeds of their dairy animals through the introduction of subsidized Artificial Insemination AI programme, in preparation for operationalizing NCC. 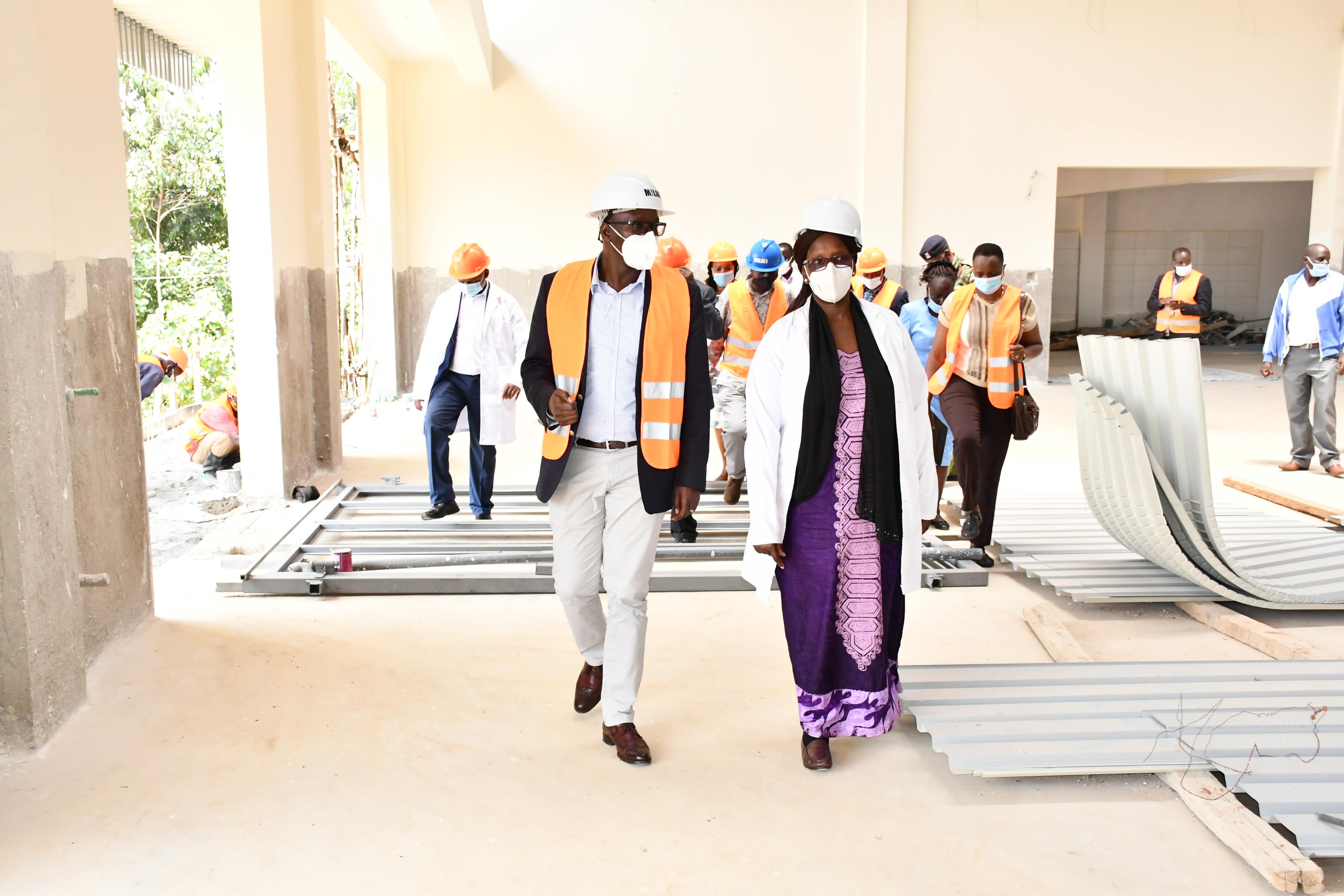 She said that her Livestock department will see to it that the capacity of Animal Health Assistants in Nandi who also double up as AI inseminators is built further to enable them improve on service delivery to the farmers.

“Regular refresher trainings and practice is key for successful AI thus the need to continually build the capacity of those who perform it if we wish to improve on our breeds and increase milk production,” she said.

In its first phase, Nandi Cooperative Creameries NCC will process Fresh milk, Long life milk, Yoghurt and Mala. The county will then deploy more equipment for Extended Life Shelf and Ultra Heat Treatment and processing ghee and butter in the second phase and subsequent phases. 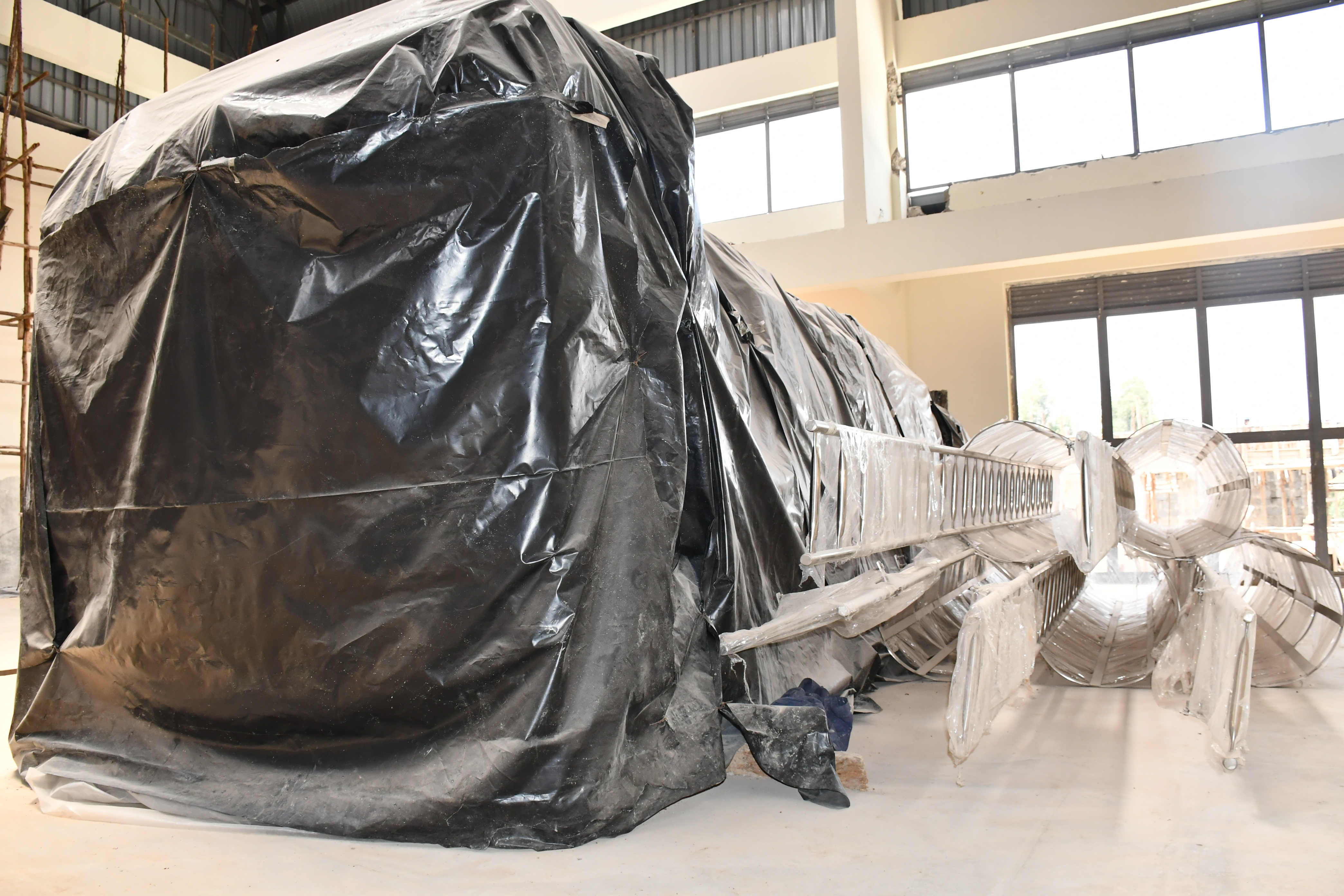 At present, part of equipment for the first phase have been delivered in Kabiyet while the remaining are expected in site later this year.

Once complete, the facility targets to supply her milk to the Lake Region Economic Bloc LREB market which has a population estimated to over 14 million people. NCC will also be capable to process enough milk to supply pupils under the Early Childhood Development Education in Nandi County.
#TugaTai #TransformingNandi 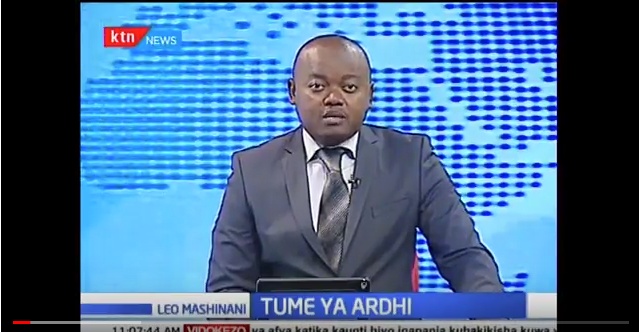 Medical Education for Specialized Healthcare & Medical Education, Khawaja Salman Rafique presided over a meeting at Civil Secretariat, today which discussed in detail the matters for constitution of a committee.

The Highest Glory of the Citizenâ€™s Revolution was this: it connected in one indissoluble bond the principles of Civil Government with the pronciples of Humanity.

Medical Education for Specialized Healthcare & Medical Education, Khawaja Salman Rafique presided over a meeting at Civil Secretariat, today which discussed in detail the matters for constitution of a committee.

The Highest Glory of the Citizenâ€™s Revolution was this: it connected in one indissoluble bond the principles of Civil Government with the pronciples of Humanity.